This Oven Bacon how-to recipe will explain why this is the BEST way to make bacon!

List of reasons to bake bacon in a cast-iron skillet: 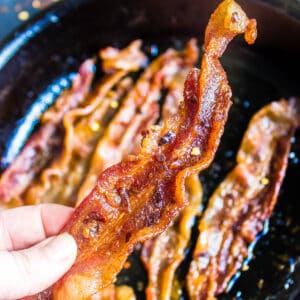 Cooking your bacon in your cast iron skillet in the oven will not only save your stovetop from being splattered in grease but it will also cook the bacon more evenly and season your skillet at the same time.
5 from 3 votes
Print Rate Pin Recipe
Course: Breakfast
Cuisine: American
Keyword: basics
Prep Time: 5 minutes
Cook Time: 20 minutes
Total Time: 25 minutes
Servings: 6
Calories: 92kcal

# Hashtag with us!Don't forget to mention @castiron_keto or tag #castironketo on Instagram with your creations! We love seeing what you're making.
« Keto Jalapeño Popper Meatloaf with Bacon!
Keto Pizza Pull-Apart Rolls »