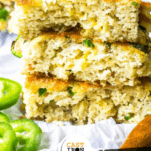 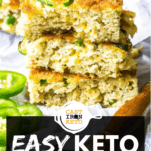 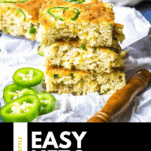 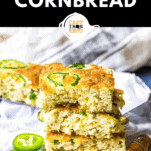 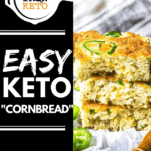 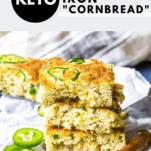 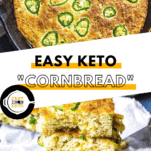 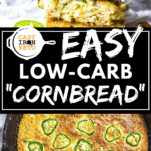 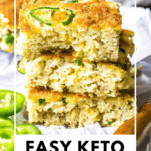 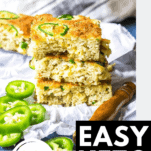 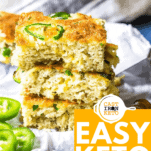 This EASY Keto Cornbread is sure to knock your socks off, it’s a wonderful low carb alternative to the southern classic. 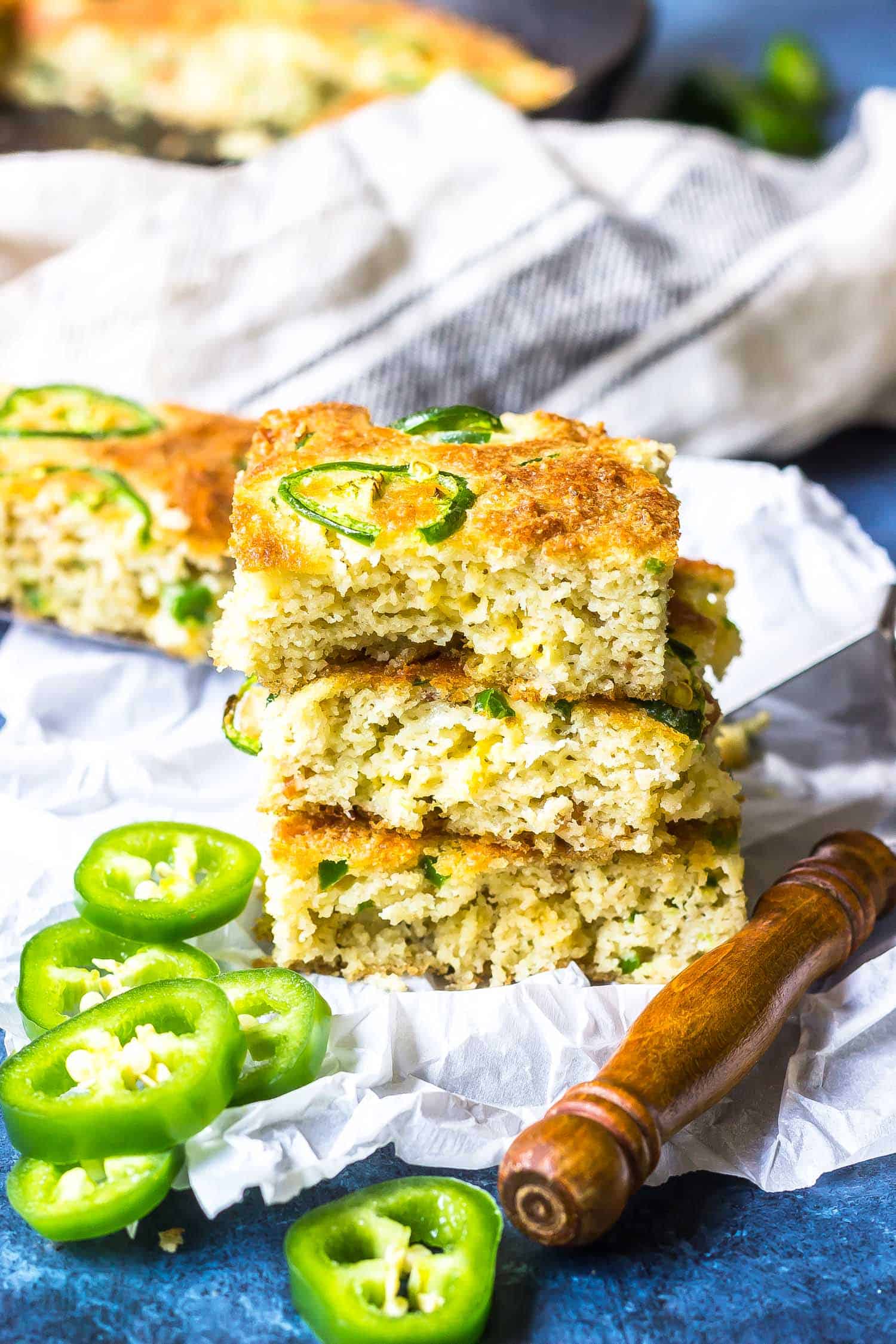 Growing up cornbread was a staple around our house, so much so that we had a cast-iron skillet devoted to cornbread (now ours is for Keto Cornbread!). Nothing else was allowed to be cooked in that skillet, and the bottom of it was slicker than owl snot (I love southern colloquialisms).  We ate cornbread on the side of so many dishes, but it was most commonly served with soup beans and collard greens, which is about as stereotypical a southern meal as they come.

If you’ve been following Cast Iron Keto on social media, you may have seen the news that my grandmother passed away in the middle of August.  She made the best cornbread, and she also had the best adages and colloquialisms.

She worked as a nurse for over 50 years and at the funeral home, one of the doctors she worked with had a list of these “Roxie-isms” he had typed up and printed out.  Some off these are a little…colorful, so as my Nana would say “Pardon my French”, but I thought I would take this opportunity to share a few of my favorites:

I’d love to hear your favorite southern (or not so southern) saying in the comment section below.

Anyway, about this Keto Cornbread…I took the liberty to add some jalapeños to mine, but it is just as good without them if you’re in the mood for something a little milder.  If you want a killer comfort meal it pairs great with these pork belly collard greens, keto fried chicken, or this keto version of mashed potatoes and gravy.

This isn’t a sweet cornbread as it’s sugar-free but you could add in some sugar substitute like Swerve if you’d like it to be sweet!

We’re using a combo of flours here, a 1/2 cup of almond flour and a 1/4 cup of coconut flour. I feel like that gives us the best texture!

Now, we have nothing against corn other than that it doesn’t fit in well with a keto diet. Corn has 41g of carbs per cup, that’s more than 2 days worth of carbs for most folks on a keto diet. SO, that’s why we created this recipe! 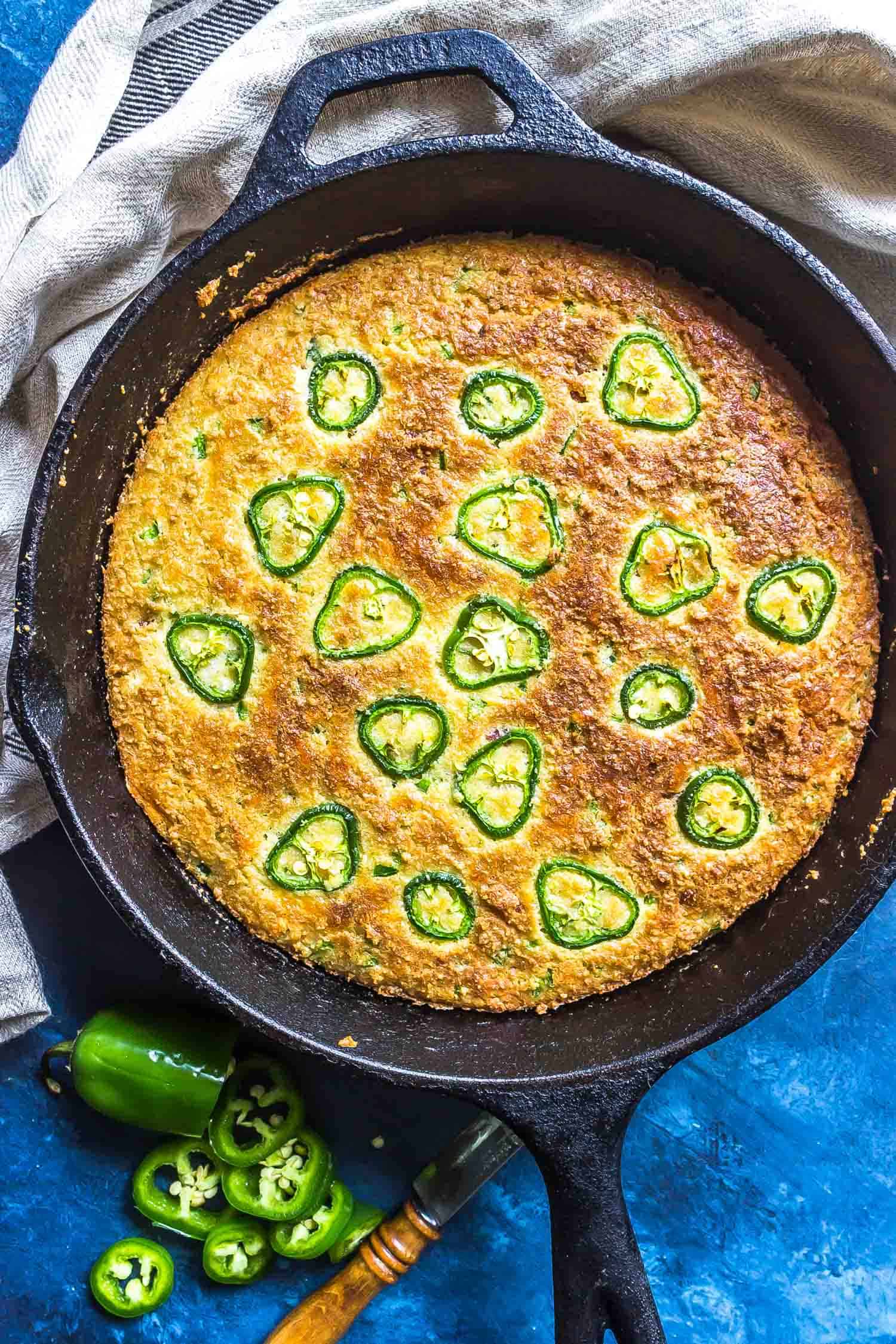 Let’s get to some common questions:

How to make gluten-free keto cornbread:

Then begin by mixing up the wet ingredients in a mixing bowl like the melted butter, heavy cream, corn extract (if using), and eggs. Then add in the dry ingredients: almond flour, coconut flour, baking soda, and salt.

Once it’s mixed up you’ll add in any fillings you want (see below for suggestions!) you’ll pour it into a well-seasoned cast-iron skillet then pop it into the oven for 30 minutes.

PRO TIP: want a super crunchy bottom? Heat a tablespoon or so of butter in the bottom of the skillet over high heat. Pour the batter into the hot skillet just before transferring it to the oven.

Do I have to use a cast-iron skillet for this Low Carb Cornbread?

Nope, obviously, a cast-iron skillet is the classic way to cook cornbread and it yields a crusty bottom but you can use any baking dish you have. Just make sure it’s roughly the same size.

Can I use a corn extract/flavoring in this Keto Cornbread?

Yes! This one is our favorite.

Why do you call it cornbread if there’s no corn in it?

Well, because no one searches for keto bread that tastes like cornbread. We have to name things that people are likely to search for so that the recipe can actually be found and made by all of you.

Can I make these into Keto cornbread muffins?

Yes! Just use your favorite muffin tin and reduce the cooking time to about 20 minutes.

Can I add in fillings to this low carb Keto Cornbread?

YES! This may be the best part of making this “cornbread” recipe. Here are a few ideas:

What is the nutritional information for this Keto Cornbread recipe?

To get a specific serving size you’ll want to weigh the final dish then divide by the number of servings. We can’t provide this information as your cooking style will vary from ours as well as the brand ingredients you choose to use.

Can I use this Keto cornbread for sandwiches?

Yes! This keto cornbread makes an awesome sandwich or slider bun. Just cut it into the shape you want and you’re good to go! Wouldn’t a leftover turkey sandwich with keto stuffing, keto cranberry sauce, and other goodies be delicious?!

Can I make stuffing with this recipe?

Yes! We even have a recipe handy for you! This Keto Cornbread Stuffing is to DIE for, seriously it’s so good!

It’s perfect for Thanksgiving, Christmas, or any other time you’re craving stuffing! The cornbread crisps up nicely in an oven, that’s the key to drying it out to create the perfect stuffing.

All of the other classic ingredients are included too like fresh herbs (rosemary, thyme, sage), celery, onions, plenty of butter, broth, and eggs. 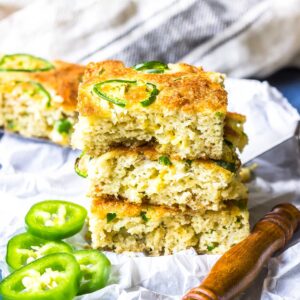 # Hashtag with us!Don't forget to mention @castiron_keto or tag #castironketo on Instagram with your creations! We love seeing what you're making.
Previous Post: « Seeded Keto Rolls
Next Post: Keto Cabbage Soup with Smoked Sausage »