Instead of asking yourself "can you eat cream of mushroom soup on keto?", simply make your own! Our easy Keto Cream of Mushroom Soup is absolutely delicious and 1000% better than the canned variety! It's perfect for the keto diet!

This Keto Cream of Mushroom Soup recipe is sponsored by out friends at Bob's Red Mill! Thank you for supporting the brands that make Cast Iron Keto possible!

We adore our Keto Cream of Chicken Soup but we thought is was prime time for a mushroom version! Not only is our Keto Cream of Mushroom Soup perfect for casserole dishes, it's great for plant-based keto dieters as well as it can easily be made dairy-free and uses no cream cheese!

With fresh herbs like rosemary and thyme, this flavor filled cream of mushroom soup is as fresh as it is easy to make. With just 5 minutes you can make this yourself with the help of a little xanthan gum!

Since we all know that flour or cornstarch isn't keto-friendly, using Bob's Red Mill Xanthan Gum creates a silky and thick soup that's texture can't be beat! Plus, it's gluten-free!

Let's get to the specifics!

What is cream of mushroom soup anyways?

The history of condensed cream of mushroom soup is a long and winding one. The first incarnation of the soup was created in the early 1900s by food manufacturer Julius Kempner. At the time, Kempner was looking for a way to create a cheap and easy-to-produce soup that could be sold to the masses. He succeeded in creating a soup that was made from canned mushrooms, milk, and flour. The resulting product was thick, creamy, and full of flavor.

The popularity of condensed cream of mushroom soup grew rapidly, and soon it became a staple in American kitchens. It could be found in grocery stores and restaurants, and it was often used as an ingredient in recipes.

In the 1970s, Campbell's acquired the rights to condensed cream of mushroom soup. They have since been responsible for producing and marketing it. The recipe has remained largely unchanged over the years, although some variations have been introduced (such as low-sodium and organic versions).

Today, condensed cream of mushroom soup is still a popular product. It can be found in most grocery stores, and it is often used in recipes such as casseroles and soups.

How to make keto cream of mushroom soup

Melt the butter in a small pot over medium heat. Once hot, add in the mushrooms and cook until browned, about 4 minutes.

Pour in the remaining ingredients and whisk vigorously to dissolve the xanthan gum.

Add in the herbs and spices and cook another minute until fragrant.

Bring just to a simmer and cook until the mixture is thickened, it rarely takes longer than 1-2 minutes after adding the xanthan gum. Use immediately or store for a later use.

As stated above, you can easily swap the butter and the heavy cream to dairy-free alternatives to make this recipe totally plant-based.

If you don't have fresh herbs, simply use a ½ teaspoon of dried herbs in their place. Even a dried poultry seasoning blend would work well.

You can also use chicken stock or broth or beef broth in place of vegetable broth.

If you have other mushrooms on hand, feel free to use them! White button mushrooms, baby bellas, portobellos, oyster, or king trumpet all work great as they can be cubed. Avoid mushrooms that aren't as solid like Lions Mane.

You can use olive oil or avocado oil in place of the butter but we like the richness of butter the best.

is cream of mushroom soup keto

Store bought cream of mushroom soup is not keto as it typically has too many net carbs from thickeners such as flour.

Although condensed cream of mushroom soup is often associated with traditional recipes, it can also be adapted to fit a keto diet. In fact, there are many keto-friendly variations of the soup that can be made at home.

can you eat cream of mushroom soup on keto

If you're looking to keep your carbs low, you'll need to make your own homemade cream of mushroom soup to ensure that the carbs are controllable for your needs.

what is xanthan gum?

Xanthan gum is a polysaccharide derived from the bacterial species Xanthomonas campestris. The gum is produced when the bacteria ferment glucose, sucrose, or lactose.

It is a white to off-white powder that is soluble in water and has a characteristic slightly sweet taste. Xanthan gum is used as a thickener, stabilizer, and emulsifier in food products. It is also used in personal care products, paints, and adhesives.

Xanthan gum has unique properties that make it an ideal ingredient in a variety of products. It is soluble in both hot and cold water, which makes it easy to work with.

It also has a high viscosity, which gives it the ability to thicken and stabilize products. Xanthan gum also acts as an emulsifier, helping to keep oil and water from separating.

This makes it ideal for use in foods that contain both oil and water, such as salad dressings and sauces.

Did you make this recipe? Be sure to rate the recipe ⭐️ ⭐️ ⭐️ ⭐️ ⭐️ in the recipe card below and share your creative rolls with us on social and tag @castiron_keto on Instagram! We love seeing what you come up with! 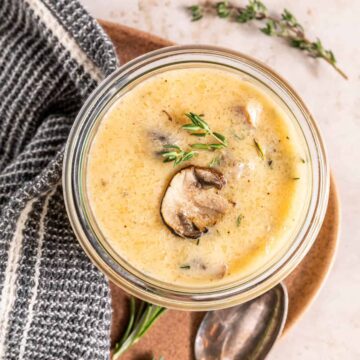 # Hashtag with us!Don't forget to mention @castiron_keto or tag #castironketo on Instagram with your creations! We love seeing what you're making.
« Keto Thanksgiving Recipes