These Keto Coconut Shrimp are made with unsweetened shredded coconut, coconut flour, and coconut oil for a coconut trifecta! These shrimp are gluten-free, low-carb, and totally delicious!

This Keto Coconut Shrimp recipe is sponsored by our friends at Bob's Red Mill, thank you for supporting the brands that make Cast Iron Keto recipes EPIC!

How to make Keto Coconut Shrimp

Can I use frozen shrimp?

You can! Just be sure the thaw and completely drain the shrimp before making this recipe.

Are unsweetened coconut flakes the same as shredded coconut?

Nope! Flakes will be larger and won't adhere to the shrimp as well as shredded coconut does. Be sure to purchase the right one for this recipe.

Are these low-carb coconut shrimp gluten-free?

Yes, these Keto Coconut Shrimp are gluten-free! Most coconut shrimp that you would order out or buy pre-prepared however, are NOT gluten-free so be careful here.

Oh man, so.many.ways! Here are some of our favorite ways to serve coconut shrimp:

Have another idea? Leave them in the comments below!

How to store coconut shrimp

To store leftover coconut shrimp you'll want to place them in a lidded container. They will keep in the refrigerator for up to 2 days and the freezer for up to 3 months.

To reheat from the refrigerator:

Preheat the oven to 425° F and place the shrimp in a cast-iron skillet or on a sheet pan. Bake for 10 minutes until crispy.

To reheat from the freezer:

Preheat the oven to 375° F and place the shrimp in a cast-iron skillet or on a sheet pan. Bake for 20 minutes until crispy.

There are 3g of net carbs per serving of these Keto Coconut Shrimp! 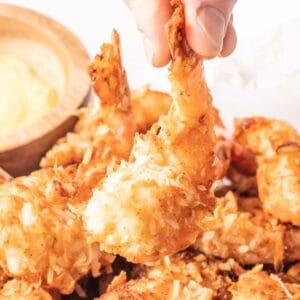 # Hashtag with us!Don't forget to mention @castiron_keto or tag #castironketo on Instagram with your creations! We love seeing what you're making.
« Keto Schnitzel
Grilled Shrimp Bruschetta »