This Loaded Keto Turnip Soup is absolutely delicious and tastes just like a loaded potato soup just without all the carbs!

This easy Loaded Turnip Soup is a great low-carb variation of traditional loaded potato soup. To keep it low-carb we’ve swapped out the starchy tubers for turnips. Turnips are a good substitute for potatoes in lots of keto recipes, like these Keto Breakfast Potatoes, because they provide a similar flavor and texture once cooked with only 3.1 grams on net carbs per 100 grams.

But the best part about this soup are the toppings. Any recipe topped with bacon, chives, and cheddar Moon Cheese gets an A+ in our book.

We have partnered with the good folks at Moon Cheese for this recipe to really display the versatility of our personal favorite cheese snack in the kitchen. For this recipe and other soups, Moon Cheese makes a great topper. Mostly because it plays a hybrid role of both cheese and cracker.

In the past, we have used Moon Cheese dust to create Keto Cheesy Chicken Poppers and yes, they are as delicious as they sound.

Moon Cheese is a great snack to munch on all by itself. Personally, we love to use it in our own homemade version of a savory low-carb trail mix.  It’s not really a recipe just a combination of things that are always in our snack drawer. It usually includes some of the following:

Viola! You’ve got a great low carb snack with endless flavor combinations to satisfy your palette.  We practically keep a bag in our hiking packs, but you could toss some in your gym bag, or simply in the center console of your car for snack emergencies.

Back to this Loaded Turnip Soup which is incredibly easy to make plus it’s super filling and nourishing. We don’t know what the weather has been like in your part of the world this spring. We feel like we’ve seen way more rain this year than in previous years.

There are few things more comforting in this world than a hot bowl of soup on a dreary day, and this soup checks all the boxes. Seriously though, are there any meals more comforting than soup?

Where to find moon cheese:

Moon Cheese is available nationwide at stores including Publix and Target. You can use their store locator to find a store near you! 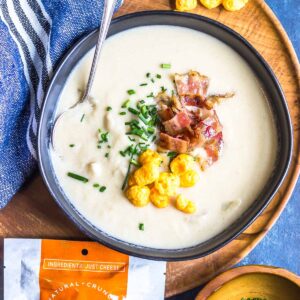 # Hashtag with us!Don't forget to mention @castiron_keto or tag #castironketo on Instagram with your creations! We love seeing what you're making.
« Keto Pantry Staples
Keto Nachos »