These Keto Cinnamon Rolls are a true game-changer. We love a nice warm cinnamon roll with our morning coffee. There is just something about the bitterness of black coffee paired with the sweetness of this cream cheese-glazed confection that is absolutely perfect.

This recipe uses the base recipe for our Keto Dinner Rolls, with a few modifications to make the shift from savory to sweet. We started testing this recipe last fall and after multiple unsuccessful attempts, it is finally ready for us to share with you guys!

Allowing the dough to chill adequately is really the key. If the dough hasn’t had enough time in the refrigerator to cool it is admittedly a pain to work with. If you’ve got the patience for the dough to firm up in the fridge the end result is totally worth it! The chilling time is mainly to help the dough be able to cut into clean rolls instead of smashing together from the pressure of a knife.

Cinnamon is one of those spices that is often overlooked as a spice that contains numerous health benefits (Turmeric gets all the glory), but Ancient Egyptians actually considered cinnamon more precious than gold.

Cinnamon has a ton of antioxidants but in order to receive the full spectrum of benefits, you’ll need to check the label to be sure you are using Ceylon cinnamon instead of the more common cassia (fake) cinnamon. 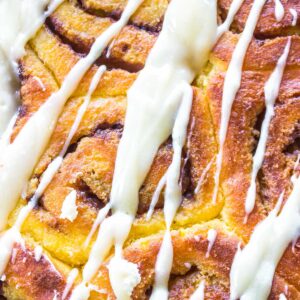 Nutritional info is for one roll (1/12th of the recipe)

# Hashtag with us!Don't forget to mention @castiron_keto or tag #castironketo on Instagram with your creations! We love seeing what you're making.
« Keto Chicken Pizza Casserole
Keto Halloumi Fries - Indian Style »