This Keto Pecan Pie tastes just like the original but it is low carb, gluten-free, and sugar-free! It's perfect for your Thanksgiving table!

From time to time we’ve been known to enjoy a nice ketoriffic confection, but this Keto Pecan Pie is our favorite (at least for the late fall/early winter months). It tasted really similar to the regular pecan pie that we grew up eating just made way healthier. Let's get to it!

The Keto-friendly pie crust is so perfectly moist and flaky you’ll find it hard to believe it’s Keto. This is by far the best pie crust we've ever made, it holds up well and even allows for crimping the edges and making designs out of the dough. We just love it.

Starting with the perfect Keto pie crust is one thing but let's be real...the star of the show is the gooey, chocolatey, pecan-filled center. Also maybe a splash of bourbon if that's your thing? 🥃

When we first began eating keto we couldn’t have made this recipe, because the ingredients didn’t exist.  Or at least they weren’t widely distributed, but Swerve’s Brown Sugar Replacement and Lily’s Chocolate Chips make this recipe a worthy replacement at the holiday table for its sugar-laden inspiration.

It’s awesome that more and more companies are recognizing the growing mounds of scientific research supporting the ketogenic diet and producing low carb, sugar-free products.  Obviously, we think the best diet is one abundant in whole foods, not sugar replacements and sweet treats, but everything in moderation, right? (80/20 rule).

2. In a medium bowl mix all of the ingredients together until a thick ball of dough forms. Knead two or three times until smooth. Press the dough into the skillet and bake for 12-15 minutes.

1. Heat the butter to a boil, as soon as it starts to boil turn off the heat and add in the brown sugar and granulated sugar, allow to slightly cool.

2. In a medium bowl beat the eggs together with the cooled sugar mixture, maple flavoring, chopped pecan pieces, chocolate chips, bourbon, and salt until smooth. Pour the mixture into the pie crust, top with pecan halves, cover the pie edges with foil to prevent burning and bake 35-40 minutes until golden brown. Cool completely before serving.

Can I make this Keto Pecan Pie ahead of time?

Yes, you can! You can either make the crust ahead of time or the entire pecan pie ahead of time. The pie will need to cool anyways to be able to set-up so making this pie a day or two ahead of when you need it works out perfectly.

How to reheat Keto Pecan Pie

Can you freeze sugar-free Pecan Pie?

You can! Here's what you'll want to do.

How to cut pie

The #1 thing is to use a large sharp chef's knife and use a slight rocking motion.

Make your first cut by slicing the entire pie in half then half again the opposite way.

Then cut each of those pieces in half again to yield 8 slices.

How to store pie

You can store the Keto Pecan Pie in the refrigerator for up to one week. Be sure to wrap it with plastic wrap or foil to prevent it from taking on the flavor of other things in your refrigerator.

Can I use a regular pie pan instead of a cast iron skillet?

The correct pronunciation of PECAN has been highly debated.

Do you say pee-KAHN, pee-CAN, PEE-can, Pick-AHN?  Tell us in the comments below! [US Dialect Map for Pecan]. 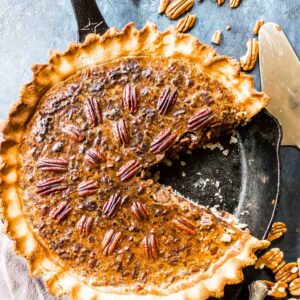 Nutritional information does not include optional ingredients: chocolate chips + bourbon. If using they will add an additional 2.25 g net carbs per serving bringing the total net carbs for one slice of pie to 6.25g