This Keto Cinnamon Roll Cake with Cream Cheese Icing is delicious for dessert or breakfast! It even has a hidden vegetable!

Is this Keto Cinnamon Roll Cake dessert or breakfast? You decide! We adore this swirled cinnamon cake with a hefty dose of cream cheese frosting. You'll never know it's sugar-free and low-carb!

We try to highlight one ingredient from a recipe and tout its nutritional benefits, and obviously you can’t have a cinnamon roll without cinnamon. So it's time for:

Cinnamon is well known for its nutritional benefits and the ancient Egyptians considered cinnamon more precious than gold.  In terms of antioxidants, it ranks #1 in herbs and spices, as well as having anti-inflammatory, anti-diabetic, and anti-clotting properties.

All that being said, if you want to reap all the benefits cinnamon has to offer, be sure you are using Ceylon cinnamon instead of the more common cassia cinnamon.

Check out the links below for more information on the nutritional benefits of cinnamon. 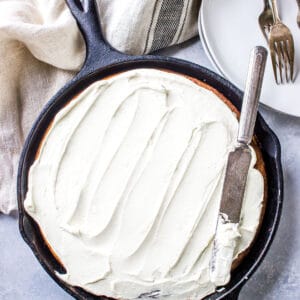 # Hashtag with us!Don't forget to mention @castiron_keto or tag #castironketo on Instagram with your creations! We love seeing what you're making.
« Keto Larb
Keto Enchiladas »